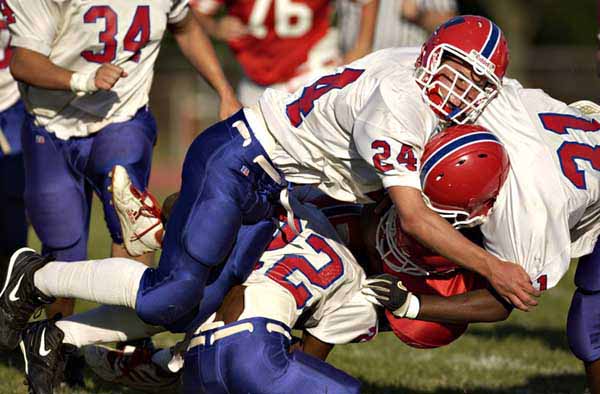 Cervical Fusions in the NFL

Football is fun to watch, and play.  But,  as a  NFL player,  you are one down away from injury.  Unfortunately,  some injuries can be career ending.   I had previously blogged about the  rates of disk herniations in the NFL.  But, there is not much information about the results of certain surgically treated injuries until recently.  Dr. Joseph Maroon,  MD,  team neurosurgeon for the Pittsburg Steelers did publish a review on the results of  single level Anterior Cervical Discectomy on 15 NFL players from 2003 to 2012.

To summarize the study,  these 15 players had a diagnosis and symptoms of cervical radiculopathy (pinched nerve in the neck).   Each player had a single Level Anterior Cervical Disectomy and Fusion.    13 of these players did return back to play on an average of 6 months from the time of surgery.  The least amount of time to return to play was 6 weeks.  The remaining two players were given the OK to return to play,  but chose to retire.

All 15 of the players remained symptom free of pinched nerve sensations for a minimum of 2 years.

Of the 13 players that did return to play,  5 did retire after an average of 2 years.  The remaining 8 continues to play without any sport related neck complaints.

This is the largest series on neck fusions on NFL athletes.  While we may not apply all this information to the general population,  we can make some general observations.

3. For patients with single level ACDF,  timing of return to full activity varies.

4. Athletes returned to play had a normal neurologic exam and full range of motion.  If we use that criteria,  it is a reasonable guideline for all patients.

I have heard the arguement that NFL athletes are highly motivated professionals,  and the monetary rewards make these athletes more likely to return to full activities.  I have also heard that these athletes do not have the same understanding and concept of pain,  and therefore will push themselves to return to activities sooner than others.  While I agree with both of these points,  I also see the same results in normal everyday people.  In my opinion,  Anterior Cervical Discectomy and Fusion still remains an excellent option for the right patient.  While there is much interest in artificial disk replacements for the neck,  at this time,  Cervical Discectomy and Fusion is still the choice for high impact occupations such as football.