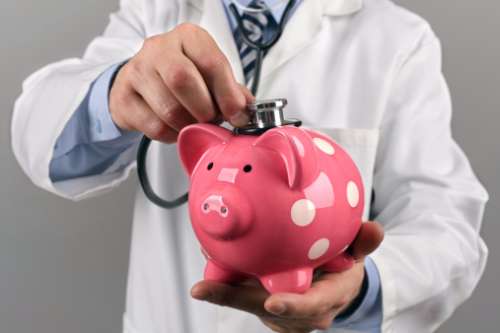 The Cost of Medicare Spine Surgery

In this age of Healthcare cost transparency,  few people really know what the US Government is really paying the doctors.

In 2013,  Bedlani et al published a fascination article called The Patient Perceptions of Physician Reimbursement for Spine Surgery.   In the study,  200 consecutive patients of an outpatient clinic were provided an anonymous survey on what they thought a surgeon would get reimbursed for a typical spine surgery procedure.  The reimbursement amounts were only for the surgeon fee,  not the hospital.

On average,  the survey respondents thought surgeons received $21,299 for a lumbar disk surgery,  but with medicare reimbursements,  it was assumed the government would only pay $12,336 to the surgeon.

The average person will be very surprised that Medicare reimbursed the Surgeon $971 for a discectomy procedure.  Further surveys showed 92% of respondents thought the $971 was too low.

A 2015 study by Goz, et al titled  Geographic Variations in the cost of Spine Surgery reviewed  the total cost of anterior cervical disectomy and fusion (ACDF) surgery and lumbar fusion (PSF) surgery by location.  Medicare Utilization and Payment data was collected from each state,  and the all inclusive cost of the procedure (surgeon’s fee,  anesthesia fee and facility fee) was calculated.  In other studies,  the charges by the providers were used,  and the costs were estimated based on a discount to the charge.  In this study,  the actual payment to the providers were identified.

These was some variation in the total costs from state to state,  but in general,   the total cost to Medicare for ACDF was $13,899 nationally,  and $12,040 in Florida.

The total cost for PSF was $25,858 nationally and $22,383 in Florida.  Remember that this is the total cost,  Surgeon fee,  anesthesia,  and hospital or surgery center.

Many Physicians feel their fees have been inappropriately targeted.  Based on this information,  I will leave it to the consumer to decide if they agree.

4 thoughts on “The Cost of Medicare Spine Surgery”