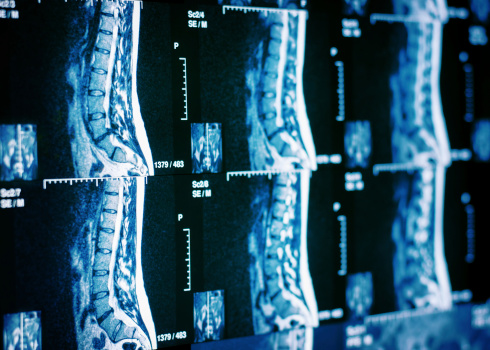 As Physicians,  and especially as Spine Specialists,  we know that disc degeneration is a normal aging process.  We also know that back pain prevalence does correlate to age,  but at the later stages of life,  there is usually less back pain.  While some of the causes of pain,  is not purely physical,  we are getting more information on how the degenerative process may cause specific pain patterns.

In the March 1, 2015 issue of SPINE,  there was a interesting article by Lao, et al,  about the Effects of Disk Degeneration on Segmental Mobility.

In this study, 162 volunteers,  with the average age of 45.5 years  had Kinetic,  or dynamic MRI’s of their lumbar spine.  Each of these consecutive volunteers were known to have back pain,  but without history of spinal surgery.  Their spines were imaged,  and the degree of disk degeneration was catagorized.  Translational  (forward and backward motion) and angular motions were measured.

Based upon this information,  the take away message is consistent with what we have traditionally told patients.  Most patients with chronic back pain are most effected earlier on in the pain cycle.  As patients age,  there seems to be less pain.  We attributed the lessening of the pain  secondary to psychological accommodations,  activity restrictions, and reduced activity levels from normal aging.    This recent study also confirms that the science demonstrates a stabilization of the spinal segment motions as the disc degeneration process progresses.

Once again,  the human body has demonstrated the ability to accommodate and ameliorate the natural degenerative process.