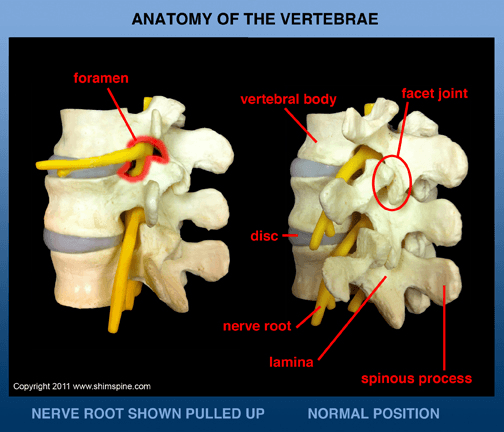 Why we have Disk Herniations

Today,  I saw a very rare patient.  Why?  Because he is 40 years old,  and his MRI report read “Normal Lumbar Spine.”   After looking at his MRI,  I came to the same conclusion.  There was no evidence of any disk narrowing,  disk dehydration, or bone spur development.  But he had back pain,  from a pulled muscle.  He probably did not need the MRI to diagnose that,  but that topic is another blog.

In the above picture of a Spine Model,  you can see that there is an entity called the Disk.  The disk is made up of two general parts.

1. The Annulus,  which is the tough outside cartilage wall,  that acts similar to a ligament  (a tissue connecting two bones to one another).  In the most simple of explanations,  it holds the vertebral bones in alignment.

2. The Nucleus,  which is the softer,  initially gelatinous center of the disk,  that gives the disk its shock absorbing properties.  Some will say it is like a very hard,  tough water balloon.  A tough outer skin,  but a watery soft inside that allows it to absorb some stress.

The problem is the disk does not maintain its water content forever.  Inside the Nucleus are special materials called proteoglycans.  At the earlier stages of life,  the proteoglycans absorb water very well,  thus maintaining the water pressure,  and height of the disk.  Scientists have discovered that as we age,  the proteoglycans change,  and cannot absorb as much water.  The water starts to leave the Nucleus.  Our water balloon starts to lose its firmness,  or turgor because of the loss of water content.  The disk height begins to shrink.   With the loss of turgor,  or strength,  there is more motion or slack in the disk.  This allows the vertebral bones to shift more.  This causes stresses to the ligaments,  muscles and tendons surrounding the disk.  It will also cause extra motion of the joints of the spine called facet joints.  With the extra motion,  the smooth cartilage lining starts to wear,  and you start to develop spine arthritis in the joints.  In addition,  the slack in the disk  allows extra motion and stress on the wall of the disk,  potentially causing fissures in the annulus.  Also,  with the extra motion,  the insertions of the disk on the endplates of the vertebra can weaken causing micro fractures of the endplates.  The latest research show that this endplate failure may very well be the real reason disks herniate.  As the endplate gives way,  the softer Nucleus penetrates out along with the endplate.

Of course,  we are over simplifying this topic.  Compound this degeneration with some sort of stress,  and now we may have a  Herniated Nucleus Pulposus or a Herniated Disk.   Incidently,  the concept of degeneration predisposing people to herniations is considered common sense,  but the research has not  yet confirmed this seemingly obvious conclusion.  Nevertheless,  this degeneration process is thought to explain the identification of Disk Herniations in the majority of people over the age of 40.

In the first part of the Blog,  I commented on the rarity of a normal Lumbar MRI in a 40 year old.  I hope the reader now understands why I made that statement.